Back in May, Goodyear announced the released their very first models of tires that were designed and manufactured in-house; the Newton MTF and Newton MTR. By bringing every step of development under their own roof, the hope was to develop casings, tread patterns and rubber compounds with a performance comparable to that of some of the most popular models from big name tire manufacturers. 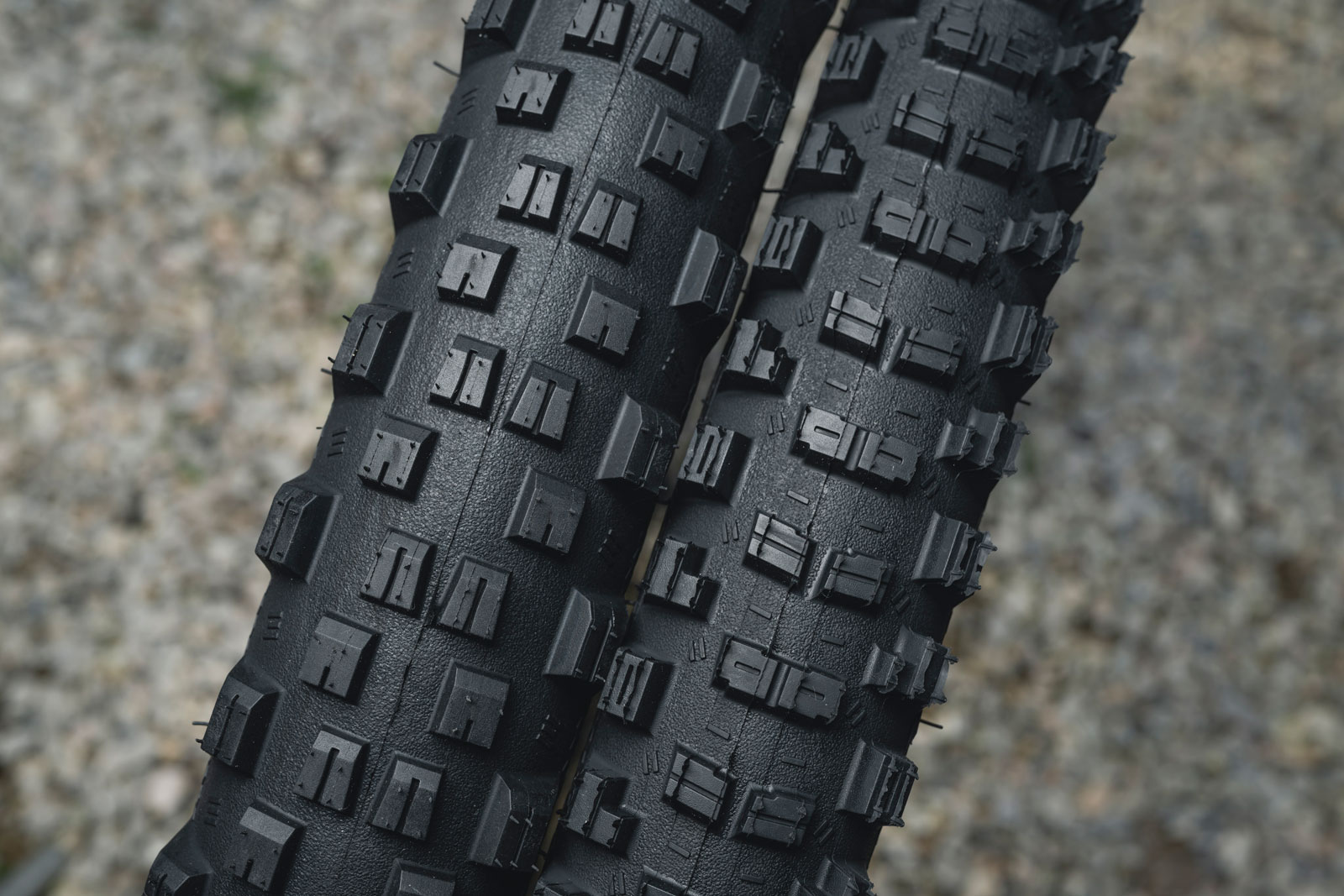 We got a First Ride on these front- and rear-specific mountain bike tires at the Winter Bike Connection event in Italy. That was way back in February, when the beautifully maintained Trail Brothers’ singletrack of Massa Marittima was in that super grippy almost-dry stage, offering rather flattering trail conditions. At the launch, we published our initial thoughts on the Newton MTF & MTR, but after only a handful of laps, our insight was limited. Now, after a very dry summer (the driest in 40 years), we feel we have more to share with you. 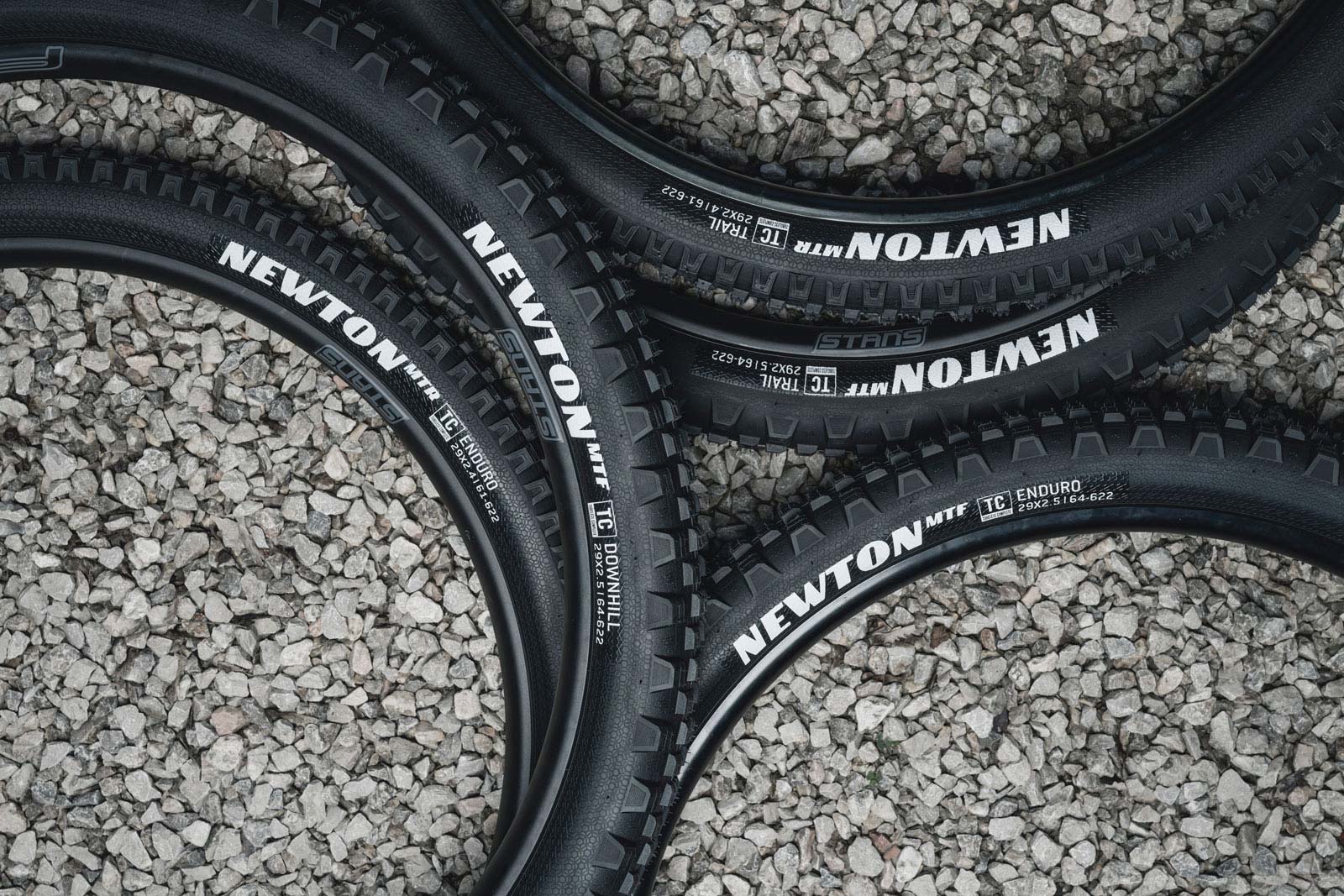 I’ll start by saying that, overall, my impression of the Goodyear tires is quite, well, good. But, thanks to my erroneous receipt of pre-production tires, it has taken a long while to reach that conclusion. Things got off to a poor start when I noticed the poor braking performance of the Newton MTF around six rides into the test. Upon inspection of the tread blocks, I noted a very regular pattern of knob splitting; this was present on pretty much every pair of the wider-spaced center tread knobs, and also on the non-drive side edge knobs of the Newton MTR.

A pre-production set of tires suffered from tread block splitting early on in the test; we’re happy to report the latest production tires we tested do not have this issue

Having discussed the issue with Goodyear, it seems they did indeed send me a set of pre-production tires in error. The rubber extrusion method had apparently not yet been finalized, hence its poor quality. I am happy to report that, having since tested a confirmed set of production tires, the issue of knob splitting is nowhere to be seen, and the tires’ braking performance is much improved in comparison. 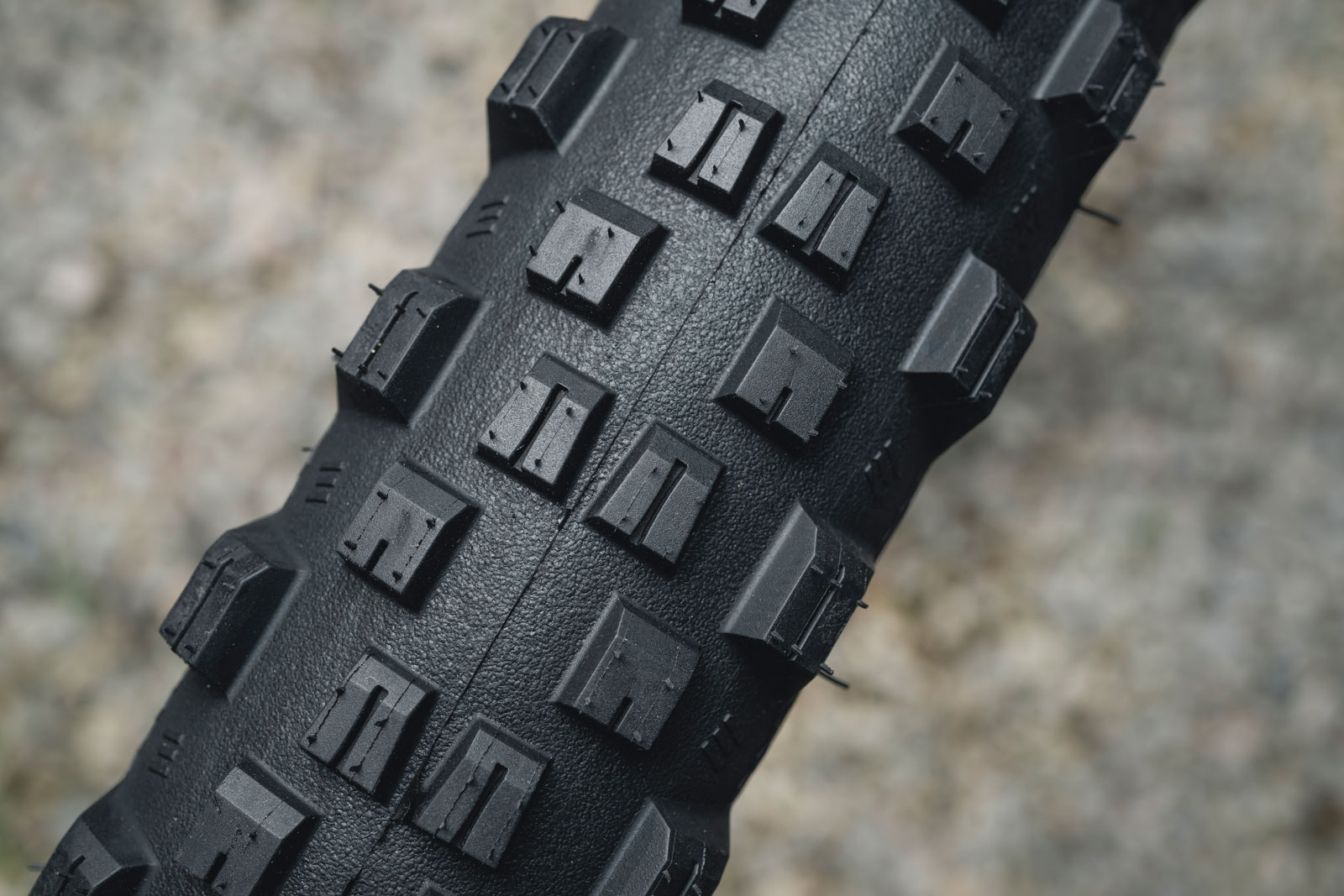 To the touch, they aren’t super tacky tires. Though the MTF’s rubber durometer is a low 40a at the side knobs, and a slightly harder 42a center tread, they actually feel much more firm than other brands’ 40a rubber compounds, and they rebound faster, too. Clearly there’s a lot more to a rubber’s behavior than its Shore Hardness reading alone.

Regardless, out on the trail the Newton MTF and MTR have delivered very good grip. Due to the stiffness of the Enduro casing tires, it did take me a good while to settle on the most appropriate pressures (more on that later), but since then I have developed a high level of trust in the tire’s ability to maintain grip through bermed and flat corners alike. 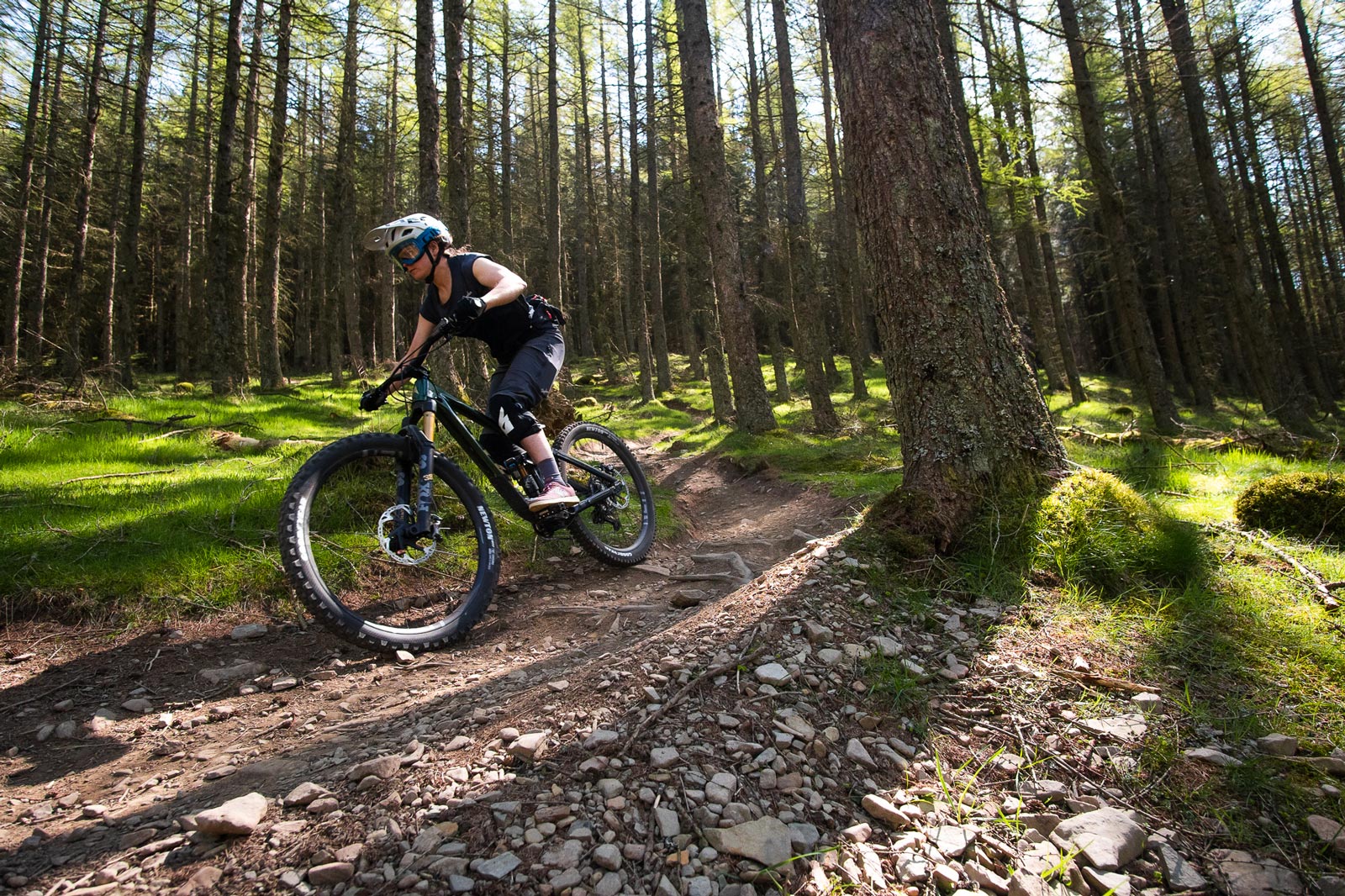 The vast majority of the testing has been carried out on dry, hard pack trails that have been baked in the sun. A marble-like debris sits atop the cracked surface. The Goodyear Newton MTF and MTR tires have been nothing short of excellent in those conditions. I keep expecting to wash out in these loose turns literred with rubble, but rubber side down I have remained. Even with the occasional panic-pulling of the front brake in said turns, the tires have miraculously maintained grip. 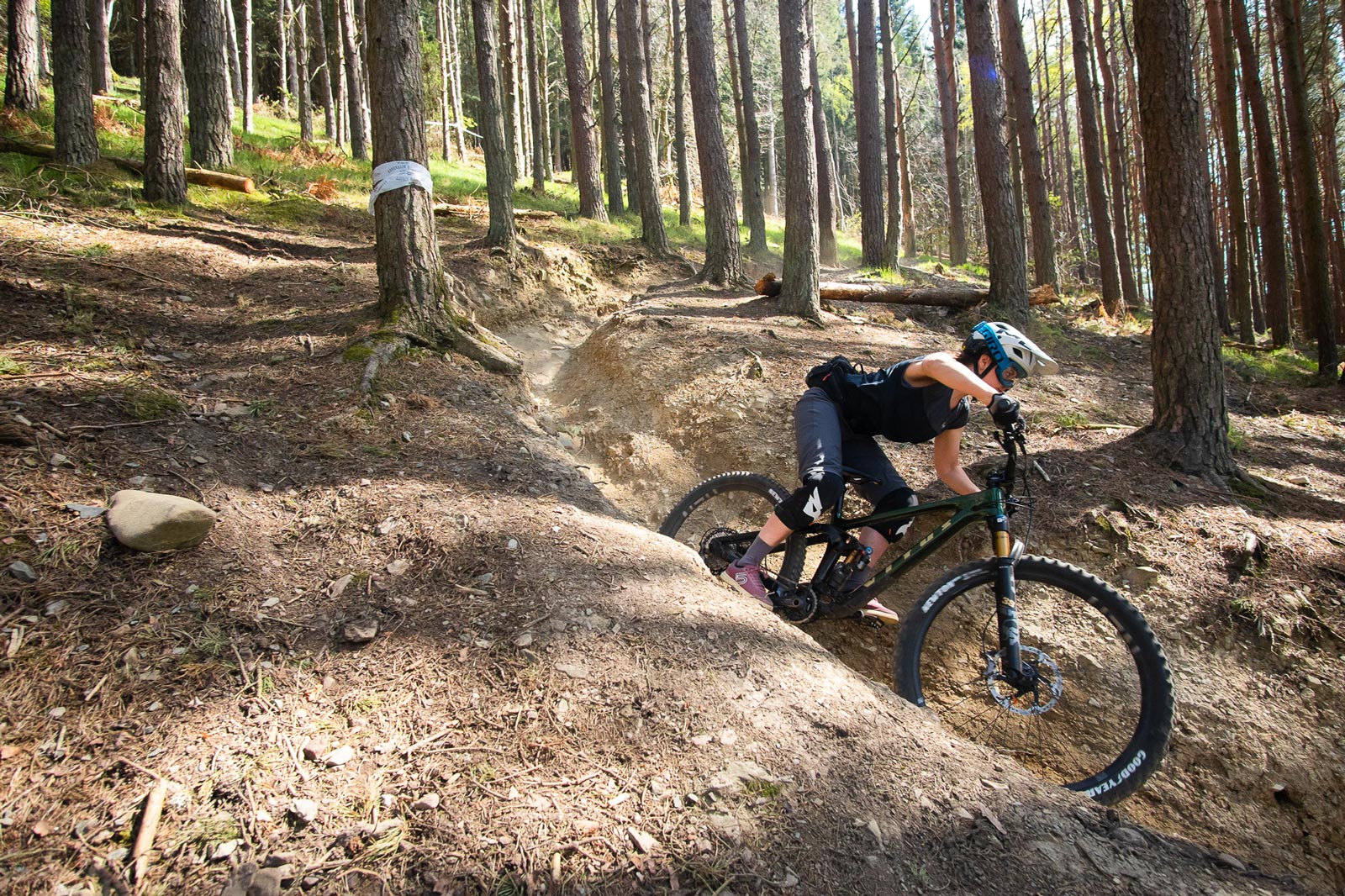 A touch of rain has produced some short-lived damp conditions in the woods, and the Goodyear Newton MTF and MTR have performed well here, too. The front tire’s edge knobs are tall enough to bite through the soft surface layer to firmer terrain underneath. The rear tire, on the other hand, has been locking up very easily under braking in these greasy conditions,. That’s mostly not really a bad thing however, especially when you need a helping hand around a very tight turn.

The Goodyear website has a tire pressure calculator to give riders a ball-park starting point. It considers data like rider weight, riding style, wheel size, rim width and type, as well as ground conditions, to estimate the appropriate pressure for each tire model. For my 60kg weight, the calculator recommends 21 PSI for the 29″ x 2.5″ Newton MTF and 26.5 PSI for the 27.5″ x 2.4″ Newton MTR.

My experience is that those pressures are way, way too high. They may have made sense in Alpine bike parks, where the high speed trails are literred with braking bumps, holes and often huge expanses of roots, but for my local Tweed Valley trails, that was overkill.

The highest pressures I ran were 20 PSI up front, and 22 PSI in the rear. Here, the tires felt harsh, giving the bike a wooden ride feel. The casing simply felt too stiff at those pressures, making the bike pinball through rougher sections of trail with the carcass seemingly unable to deform sufficiently. I was a little surprised by this given the 2 x 120 TPI carcass construction, but the relatively tall butyl inserts at the side walls likely account for that harshness I felt. 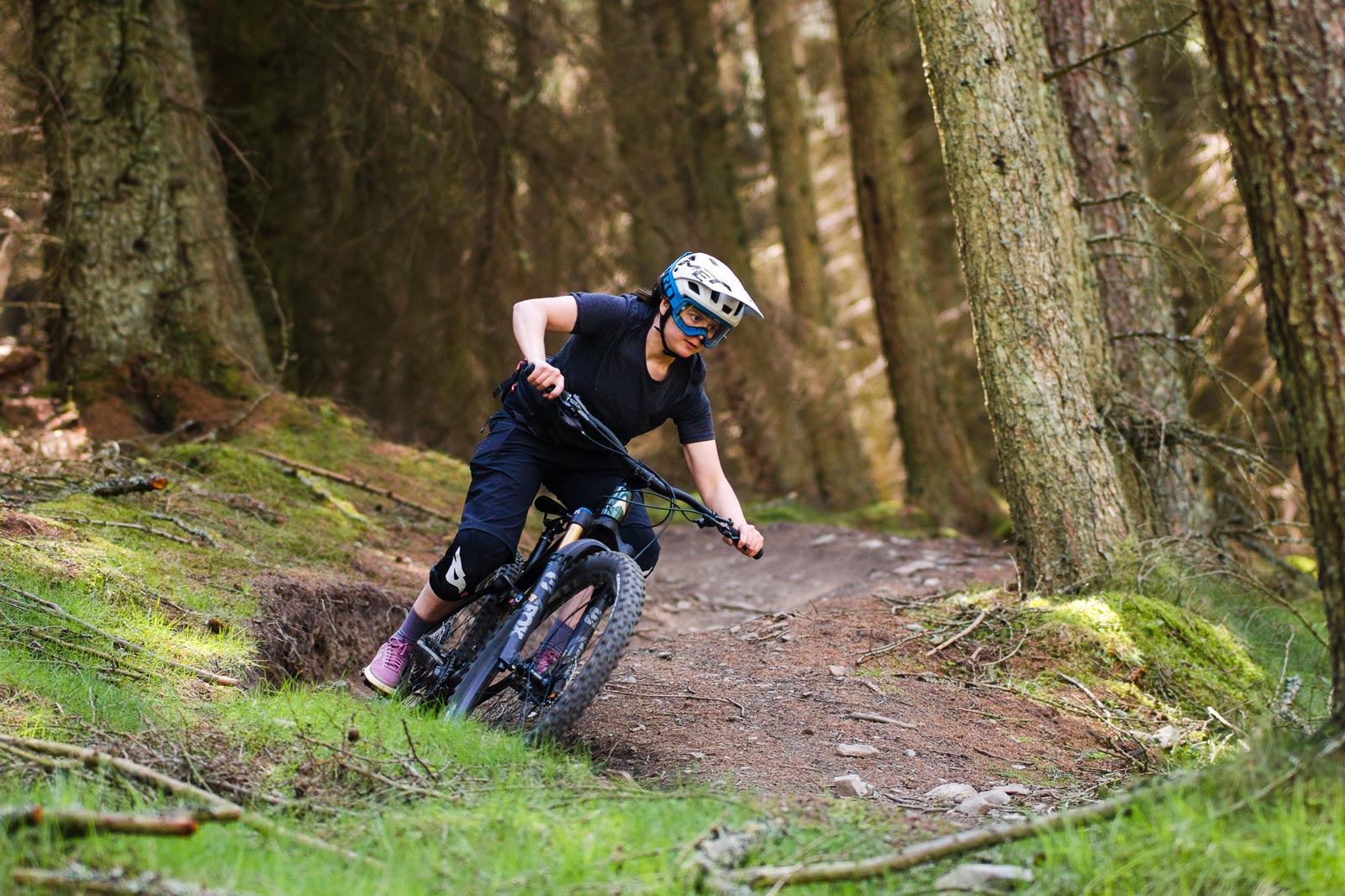 It’s likely that I would have had a much better experience with the 1 x 60 TPI Trail Casing Newton MTF that lacks that tall butyl insert. Worth noting here, however, is that the Trail Casing tread is made up of a harder durometer rubber. So, the improved comfort may have come at the expense of grip.

The other side of the coin is that I have remained puncture free for the duration of the test. That’s fairly impressive, given that I dropped the rear tire pressure as far as 17 PSI for a flat-out run of one of the faster, rock strewn trails of the Tweed Valley. There were more than a handful of bottom-out events, after which I listened carefully for a hissing sound of air escaping the tire that, happily, never came.

Jessie-May Morgan is the UK & Ireland Tech Editor of Bikerumor. She has been writing about Mountain Bike Riding and Racing, and all the technology that comes along with it for 3 years. Prior to that, she was an Intern at the Mountain Bike Center of Scotland, and a Mountain Bike Coach and Leader in the Tweed Valley, and prior to that, a Biological Research Scientist at the University of Edinburgh. Based in Innerleithen, Scotland, Jessie-May can regularly be seen riding the Tweed Valley’s Enduro and Downhill Tracks, often with a race plate tied to the handlebar.